The following is a guest post from Chicks alumna Sarah Goldman who has spent the last couple of months climbing all the epic rock she can get her hands on. She’s graciously allowed us to re-post her Yosemite photo blog here, and we’re looking forward to hearing more from her latest trip to Canada! 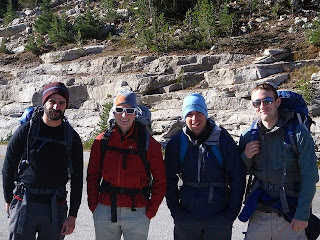 Back in August, me and some of my homies, yeah these guys are some of them, went to Yosemite….and got SCHOOLED! There is just too much to say about this trip so Im just going to throw up some photos.  All in all…battleing frigid and scorching temps, mind blowing runouts, and some really long approaches we had a great time and major learning occurred! This trip represented my official full-on return to climbing and while my climbing wasn’t where I wanted it to be, I’m psyched I went and was super lucky to have wonderfully patient and fun partners.

So the picture above is taken in Tuolumne….we spent a few days up there trying to get used to the rock and the weather…9,000 feet and full on snow, hail, rain, etc.

As a result of the temps and us getting our bearings we went out to do some top roping for a bit and even that proved to be difficult!  Colleen busted out all of her SPI magic although my favorite quote from this day was uttered just after I was lowered over the edge: “Oh, this is never going to work.” Pretty sure this picture was taken just following what never worked. 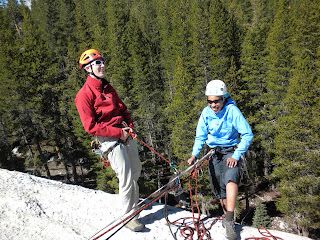 It was warm for a second, and I got bored…so, well push ups seemed like a good idea. 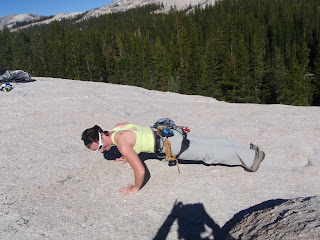 This is Ana topping out on Holdless Horror, a sweet 4 pitch 5.6 in Tuolume that we swapped leads on. Ana got the business pitches and did an awesome job. Super fun day on Dozier Dome. 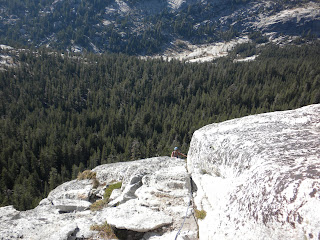 This is Dozier Dome….Holdess Horror and Bull Dozier routes are to the right of center. 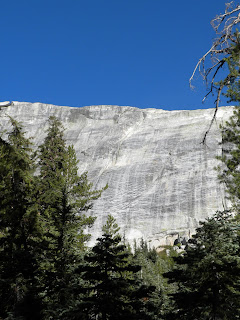 After a few really cold, but clear days in Tuolumne, we were all ready to head to the Valley where we heard it was still summer. We had dreams of climbing in capris, (yes, the boys too!) and tank tops and generally feeling our extremities again.  Our drive down into the Valley was spectacular and our first glimpse of the great ones was awesome….

Unless you live under a rock instead of on one, you probably recognize these guys…the jewels of the Valley El Capitan and Half Dome. 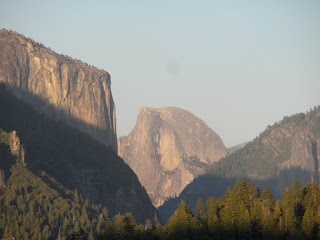 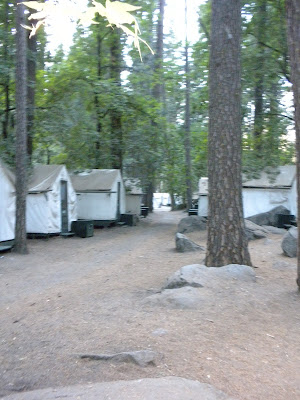 These rows of tents went on and on and on…..we got lost numerous times trying to find our shanty.  They were though warm and comfortable with nice beds and linens.  I had the extreme pleasure of having the next door bathhouse light in my face each night which added extra charm.

In an effort to get on one of the major classics, Colleen and I opted to share a guide for the 16 pitch 5.7 A0 Royal Arches.  It was a long long meandering day but definitely worth the time and energy…even if it meant 10 rappels in blazing hot sun. 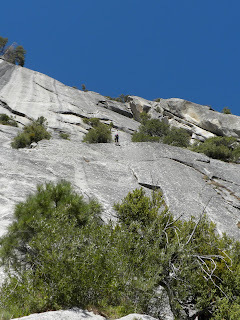 On the last climbing day of our trip, three of us, Colleen, Edwin and myself went after another classic, this time the 5.7 on Half Dome.  With a daunting six mile approach, a million pitches of runout slab, and a nine mile descent, we were successful in making it a complete epic that took 22 hours including wandering around on top of Half Dome in the super dark looking for the descent cables, some granite steps, and trying desperately to quite literally not walk off a cliff.  I hate to say it, but if Colleen hadn’t been able to pull up some much needed beta on her iPhone, we might still be up there. 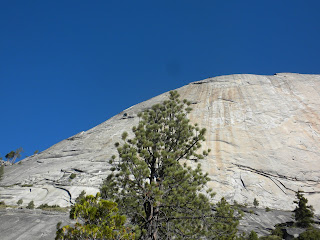 Snake Dike follows the left horizon…forever….and tops out with 2000 feet of Class 3 slabs to nowhere.

Better get out the flag while we still have sunlight…the summit was at least another hour away at this point, but it still made for a good picture! Thanks Edwin and Colls for a helluva a day! 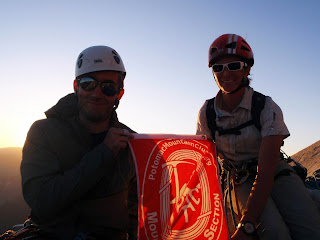 It was a great trip full of interesting surprises, challenging moments, loads of laughter, singing and the occasional speeding ticket. We encountered nearly every weather condition imaginable and definitely got ourselves into climbing that got our attention.  Ill look forward to going back a little bit stronger and a whole lot wiser!