This past February, Chicks Girly Guides Kitty Calhoun and Dawn Glanc took a trip to Iceland with their husbands, and as a team of four collectively put up 12 new ice lines in seven days! Kitty wrote a trip report that has been published on Patagonia’s blog “The Cleanest Line”. 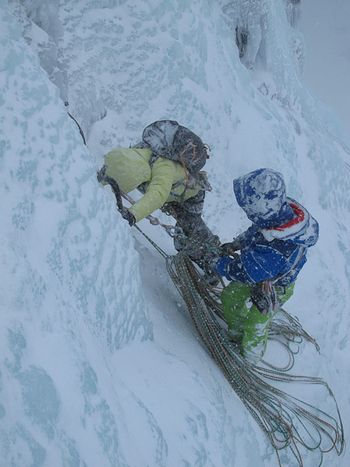 Iceland is frozen in time. Arriving there in February 2012, it was exactly as I remembered from 1998 when I was there to climb with Jay Smith and the late Guy Lacelle – grey, windy, and remote. It is the largest land mass along a mountain ridge that begins under the ocean, where the North Atlantic and Eurasian tectonic plates are pulling apart. The soil is poor, so most food is imported or grown in greenhouses. The horses, sheep and cattle are 1,000-year-old purebreds, brought over by the Vikings. The quiet is only disrupted by the sounds of millions of birds born in the undisturbed sea cliffs. My mission, along with Dawn Glanc, Pat Ormand, and Jay Smith, was to do as many first ice climbing ascents as possible in two weeks. Prospects looked good, since Iceland’s coast is barely eroded and most of the snow on the plateau above tends to melt and refreeze. Rapid changes in temperature produce wild features on frozen waterfalls such as tunnels, hanging umbrella-like roofs, and daggers that freeze horizontally.

Read the rest of Kitty’s trip report here on The Cleanest Line.

Congratulations on your successful trip, ladies!

Do you have a trip report you’d like to share? Don’t worry, it doesn’t have to be putting up first ascents – we just love to see how our Chicks use their skills outside of our clinics. Please let us know if you’ve got one to share!